The History of the Whipman Play Society

Essentially, all the Borders Festivals are based on a tradition of horsemanship and Common Riding.  In several towns this commemorates the lawless times in the 13th to 16th centuries, during long wars with England and local reiving (raiding), when townspeople would regularly ride their marches (boundaries) to protect their common lands against plunder and destruction.  This was not necessary in the more peaceful area round West Linton (known formerly as Linton and earlier still as Lyntoun Roderyck), but its annual festival is still based on horsemanship.

The term “whipman” is an old Scots word meaning a carter, carrier or cadger (pedlar), all of whom depended on horses for their trades.  It was in 1803 that the local whipmen of Linton formed the Linton Benevolent Society, initially for providing mutual financial aid to its members, and subsequently for alleviating hardship in the wider community. Thus began a tradition of celebrating the closing of the Society’s year with a public holiday known as the Whipman Play held on the second Thursday in July. The day started with Society members riding out of the village behind their elected leader, the Whipman, who carried their flag. They were usually led by a band. Although their route varied the favourite was to Carlops, and it always included formal visits to several of the large houses in the area.  The rest of the day was devoted to various sporting activities, and in the evening the Society held its annual dinner at which it transacted its closing business for the year. Later, a concert was held in the local school.

By the 1860s, the strength of the Linton Benevolent Society was failing and by 1877 both it and its procession had passed into history.  However, responsibility for the Whipman Play as a public holiday was then adopted by a group of prominent local gentlemen, and its popularity continued to grow.  As well as the usual athletic events, emphasis was placed on quoits and tilting at the ring, where horsemen had to gallop between uprights and snatch a ring suspended from a crossbar.  Trotting events were also well supported, confirming the strong influence of the horse.  In the late 1880s the prizes on offer were considerable – 1st prize for trotting was £5 and 1st prize for the 2 mile race was £8.

The sports were well attended by toy sellers and “sweety folk”, giving children the opportunity to spend the pennies they had saved.  Entertainment was provided by a brass band, often from Newtongrange, Arniston or Gorebridge, and the St Ronans troupe of international dancers were frequent performers.

The second half of the 19th century had seen the coming of the railway to Linton, which led to expansion of the village and an influx of visitors from outside the area.  LNER advertised excursions from Edinburgh Waverley to Broomlee station, and in 1900 the return fare was 1s 6d.  An increasing number of prize winners of open events came from Lothian addresses, as listed each year in The Scotsman and other local newspapers.  In 1925 a prize was introduced for the best dressed motor vehicle, but this proved unpopular and in the following year the class reverted to best dressed horses.

At some point the Whipman Play’s timing was brought forward from July to early June, and it was always on a Thursday.  In 1930, however, it was held on a Saturday for the first time and a much bigger turnout resulted.  This increased interest led to the first of the “modern” Whipman festivals in 1931.  The election of a local Whipman and his Lass was re-introduced, their installation ceremony and a parade were on a Friday evening, and the sports were held on the following day.  Despite being somewhat worn, the original flag was still in use.

The holding of the Whipman Play was interrupted during the two World Wars, and after the Second it did not start again until 1949.  Since then its duration has been extended to 9 days, commencing with the Whipman installation and procession on a Friday evening, a ride-out on the day after, then various competitions, sporting events and a dance in the following week, and culminating with athletics followed by prize-giving and side-shows on the second Saturday.  The Lower Green has always been the focus of Whipman Play activities, although for a while some events took place at a Community Centre situated where Lyne Park is now. 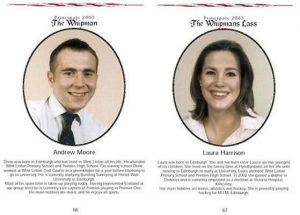 The Whipman Play celebrated its bicentenary in 2003 when there were special events and a comprehensive CD was produced to record the occasion.  It also now has its own website, and the loyal band of ex-whipmen and their helpers (The Whipman Play Society) who continue to make this festival such a success deserve all the credit and gratitude they get from the ever-growing community.  It has always been a time for joyful reunion of old friends and family, some of whom travel great distances to be here.  The children especially look forward to it, and every year it is the subject of poetry and art competitions in local schools.  The principals of neighbouring town festivals also participate, but, above all, it is for the enjoyment of the local people, and long may the tradition continue.